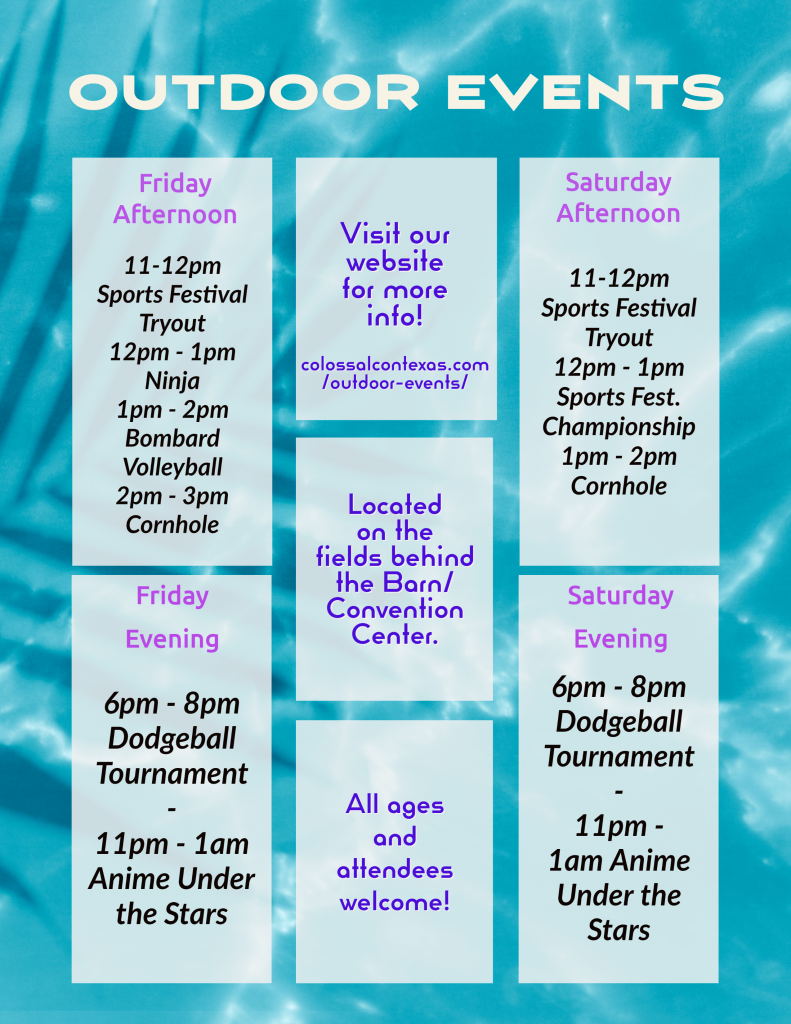 Cornhole
Cornhole or Corn Toss is similar to horseshoes except you use wooden boxes called cornhole platforms and corn bags instead of horseshoes and metal stakes. Contestants take turns pitching their corn bags at the cornhole platform until a contestant reaches the score of 21 points. A corn bag in the hole scores 3 points, while one on the platform scores 1 point.

Scoring can be swift and the lead may change hands several times in a match before the winner is decided.

Sport Festival Qualifier
Sports festival qualifier will be a test of balance, agility, marksmanship,  and  anime knowledge. You will be scored in each of the 4 events and the top athletes will face off in the tournament of champions held on Saturday.

Ninja
Come join us in the secret of the often banned con game Ninja. Ninja is a combination of freeze tag, hot hands,  a bullet time scene from the matrix

Sports Festival Tournament
The master list of Top athletes will be posted at the Outdoor events tent. The event will consist of a sprint from the starting line along a set course into a prone 10 round marksmanship range followed by another sprint to retrieve a baton and race back to the finish line. tournament will be held in pairs of  5 with the top 3 scorers receiving prizes

Bombard Volleyball
Welcome to the unholy marriage of  4 square and volleyball. There will be 2 volleyball net units setup creating a 4 square board. The Goal is to hold the King or the number 1 position for as long as possible. It will be played in teams of  2 players being in each one of the squares.  The object is to have the volleyball go over the net on your opponent’s side and hit the ground in their square. Each time the ball hits the ground in your team’s square you lose a team member until there is no one left in your spot then a new team cycles in.

Dodgeball
Dodgeball returns as part of our outdoor games! Will you save your team from certain defeat? Or will you lead your team to victory by knocking out the most players on your opponents team? Either way, it’s sure to be a good time. Game on!

How to play:
When the game begins, each team rushes to the center of the court to claim balls. The object is to knock out everyone on your opponent’s team by hitting them with a ball and without them catching it. If they catch the ball though, you’re out!

When the opponent’s team is down to their last player, you need to knock them out without them catching the ball, and your team wins! If they catch the ball, their entire team is saved and comes back into play!