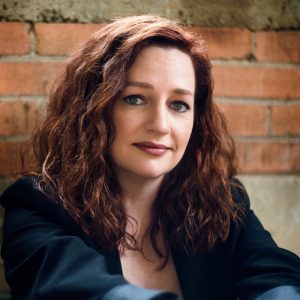 Jessica Cavanagh is a professional stage actor and life-long theatre nerd who was lucky enough to have fallen into her first voice role in an anime on a total fluke – and she was even luckier than that anime turned out to be a fan favorite, Black Butler.

What followed have been diverse roles such as Aquarius in Fairy Tale, Moeka in Steins; Gate, Carla Jaeger in Attack on Titan, Iva in Karneval, Rui Hachioji in Code:Breaker, Margaret Messner in Jormungand, Issei’s Mother in High School DxD, Tomiko Maeda in Shiki, Boss in A Certain Scientific Railgun, Sister Laura in Dance in the Vampire Bund, Roji in One Piece, and Madam in One Piece: Strong World.

Gamers may have also heard her as the insanely talkative Grandma Torgue in Borderlands 2.
Twitter: @jessmariecav
Instagram: @jessicacavanagh