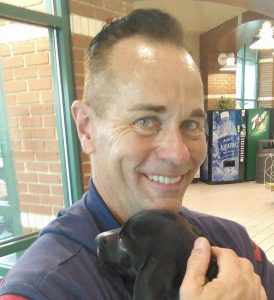 Greg Peters is a professional character animation artist who claims that he was born with a pencil in his hand. He began drawing his favorite TV characters at the ripe young age of two years old. “I remember telling people that I was going to draw cartoons when I grow up”, he recalls. In 1990 Greg graduated from the prestigious California Institute of the Arts in Valencia, CA with a BFA degree in Character Animation. He has a long list of high credentials beginning with Hanna-Barbera Productions the studio who’s cartoons he grew up closely with.

This was followed by being employed by video game giant Sega of America where he animated on various video games like Disney’s “Bonkers” etc. Next it was off to Walt Disney Animation where he worked as a Character Layout Artist on “The Lion King – Timon and Bumbaa” and as a Storyboard artist on “Mickey’s Mouseworks”, “Mickey’s House of Mouse” and More.

Greg also worked freelance for Warner Brothers on “Tazmania” before moving in house as a character designer on the award winning series “Animaniacs” and “Pinky and the Brain”. Also notable is his work at Sony/Imageworks where he worked as a Character Designer on the Dilbert TV series. He was instrumental in helping to get a studio in Wisconsin up and running as well as animate on that studio’s projects. This was followed by his move to Texas where works as a freelance artist and caricaturist in addition to appearing at several local and nationwide events including appearing at numerous comic cons as a guest artist.

Currently he is working on a variety of projects including being the illustrator on an upcoming comic book series as well as a children’s book and more. Greg believes that his versatility of being able to draw in several different styles is the number one reason for his success.